Legends of the Hidden Temple was an “action and adventure” gameshow on Nickelodeon in the 1990s. The game show required teams  of two to compete in a series of physical and mental tasks: The Moat, The Steps of Knowledge, Temple Games. and the final Temple Run. Through a process of elimination, the last remaining team entered the Temple to retrieve the ancient artifact and have a chance to win a grand prize.

The temple consisted of twelve rooms, each with a specific theme (e.g., the Throne Room, the King’s Storeroom, the Observatory, the Shrine of the Silver Monkey). The rooms connected to adjacent rooms by doorways, although some doors were locked, blocking a contestant’s progress into the adjacent room; the pattern of locked and unlocked doors changed each episode depending both on the temple layout and the artifact’s location. The unlocked doors were closed at the start of the round, but they could be opened by completing a specific task or puzzle within each room. One room in the temple contained the themed artifact. Three other designated rooms held temple guards. A contestant who encountered a temple guard was forced to give up a full pendant in order to continue. The team had three minutes to retrieve the artifact and leave the temple with it. If either contestant grabbed the artifact, all remaining temple guards vanished and all locked doors in the temple instantly opened, allowing the contestant to escape unhindered.

Check out the video to watch a thrilling episode.

My co-teacher introduced me this show online and I couldn’t wait to adapt it for the classroom.

Students are reading about social justice and courage for an independent reading unit and I took on the theme of courage to create “Legends of Hidden Courage” action adventure. I revised a few of the games (the moat) and all teams competed against each other, there was no elimination. Each challenge was worth different experience points (XP). Some challenges awarded points and A Pendant of Life — to be used in the future as a free Notebook Check Pass or Free Assignment Pass. 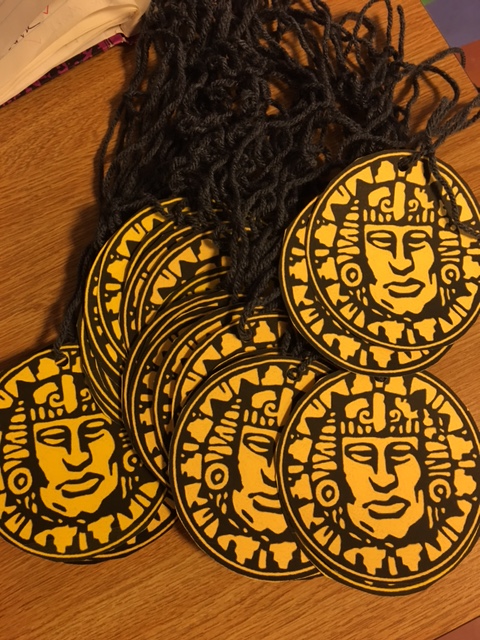 The game began with the Steps of Knowledge. Students had read and analyzed poetry the day before on themes of social justice so we started with a QuizletLive on poetic devices.

Then, came the first physical challenge: Students had to take a picture of all their team members making a positive difference in the school and post on Twitter.

A physical and mental challenge was third. Students had to match images of upstanders in history with the correct names.

The Inspiration Challenge required students to reflect and write about a person in history or present day who they inspires and they aspire to for their courage.

The last challenge was the Minefield physical challenge.

It was an action packed class period and there are many different ways that this game show can adapted based on the unit of study.